Conveying the charms of Japan
to people around the world

Overseas HIS subsidiaries convey the charms of Japan to people the world over by partnering with Japanese municipalities and corporations to plan and host exhibits and tourism marketing efforts around the world, particularly in southeast Asia.
In Vietnam, we hosted the Feel Japan in Vietnam 2019 event (August 219), with a turnout of 38,000 guests.
This was the fifth year of the Feel Japan event,designed around the idea of feeling Japan more close at hand and becoming a bigger fan of the country. It provided many opportunities for guests to feel like they had traveled to Japan while still being in the comfort of home. The stage entranced guests with performances like a ninja show from Edo Wonderland and a sleight of hand performance that is designated as an intangible cultural property of Japan. The venue hosted fifty booths devoted to food, cosmetics, cars, and home appliances, as well as forty booths from nationwide municipalities, travel firms, airlines, and railway companies, with guests able to purchase Japanese products and services and and learn more about Japan’s touristic destinations.
We will continue to create opportunities for people around the world to engage with Japan, and contribute to promoting inbound tourism and vitalizing Japan’s local regions.

We exhibited at the JAPAN IN VIETNAM event three years in a row, with governor Hirai joining us this time around.
Furthermore, HIS and Tottori Prefecture partnered in May of this year for an Agreement on Promotion of Inbound Tourism. A major strategy for Tottori Prefecture in recent years has been attracting inbound visitors from the ASEAN countries, and we have excellent local assets such as Case Closed (Detective Conan), crab, Japan’s best wagyu and pears, and the finest sand dunes in the country. Yet until now, we had struggled to truly make use of these assets. By partnering with HIS, we have achieved a huge boost to our PR efforts, with more people now visiting Tottori Prefecture. Furthermore, we have also shored up our alliance with HIS beyond PR, but also in terms of logistics and personnel, allowing us to support more visitors. We want to continue pitching to the people of ASEAN all that Tottori Prefecture has to offer. 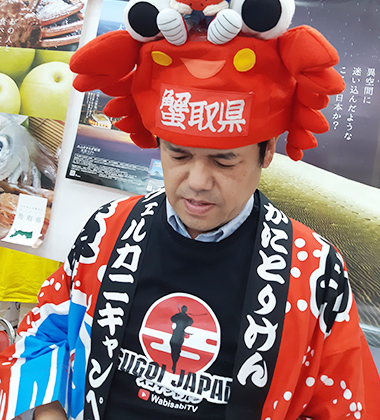 Promoting as No.1 in the number of catches of crabs in Japan

HIS is supporting the expansion of Japanese cuisine to the world as a means of vitalizing Japan’s local economies and agriculture, forestry, and fisheries sectors.
In April 2019, we assisted with the limited time opening of a branch of the popular Tsubaki Salon cafe from Hokkaido Prefecture at the Regent Taipei.
The Hokkaido-style pancakes, rich in ingredients local to Hokkaido Prefecture, were a big hit among Taipei locals. This ultimately led to opening a new store in Taipei. In October 2019, we partnered with Mie Prefecture for the “Strategic Agreement on Overseas Development of Cuisine.” By launching initiatives to bring Japanese agriculture, forestry, and fisheries products from Mie Prefecture and other parts of Japan to the global market, we are contributing to the autonomous and sustainable development of those fields and of the food industries more generally, as well as helping vitalize local economies.
Through these initiatives, we are bringing Japanese cuisine to the world and using this as a vehicle for letting people everywhere learn more about the variety of regions in Japan.

HIS engages in a range of initiatives to help foster local creation throughout Japan and solve sundry dilemmas.
HIS leads the board of the Regional Tourism Promotion Consortium, and we partner with members of the consortium to tackle a range of local issues that go beyond tourism.
We were also responsible for inbound tourism promotion for a 2018 project by the Japan National Tourism Organization (JNTO) to support the reconstruction of the Tohoku region. In Indonesia and the Philippines, we collaborated with local subsidiaries to produce promotional footage and web content featuring celebrities and depicting the beautiful scenery that Tohoku’s natural environs offer, as well as the traditional aesthetics passed down through long years of history and culture, and the way of life of local residents. This content has greatly contributed to raising the profile of the Tohoku region.
We plan to continue leveraging our global network to vitalize Japan’s different regions and local economies.